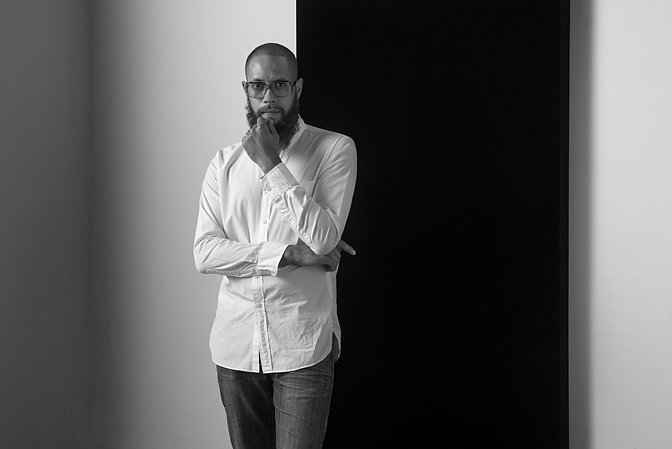 “What have I given and what has been taken?” It’s a question Nate Young’s grandfather wrote in a letter before his failed suicide attempt. Young also etched it on the dark glass surface of Underneath, his sculpture that hovers somewhere between a shadowbox and an altarpiece. As viewers open the triptych doors, the glass surface becomes opaque, altering which words are visible. What has been given and taken? They’re questions Young asks in all of his work as he excavates the gifts and burdens of his family history.

The artist’s sculptures aren’t only about remembering history—Young is interested in how certain forms can produce a sense of significance in material objects. He refigures altarpieces, pulpits, and reliquaries, shifting the meaning of the objects they contain. “The container brings value to the object within it. The container produces legibility of the importance of the object,” he says. “As soon as you start to talk about reliquaries, you’re talking about religion, about church.” In Reliquary for an Imagined Family Heirloom, a hinged plinth gives an aura of history to the Masonic ring it displays even as the title undercuts it—is it an heirloom or is it made up? In works like Untitled (Altar No. 20), viewers expecting the wooden triptych to house a sacred narrative are surprised with an opaque surface, a cloud of unknowing. This self-aware play with religious forms and perception complicates Young’s works. They’re perceptually agnostic, held in place between the possibility of revelation and religion as human-made. Young refuses to resolve this tension. Viewers explore not only the meaning of the works but how much of their own subjectivity can create it.

Young’s interest in religion and material forms has led him to create installations that turn his sculptural practice into paradoxical, even prayerful, environments. In the immersive installation The Unseen Evidence of Things Substantiated, a pulpit seems to disappear behind a canvas saturated with black paint. In other video works like Closing No. 2 and Untouched No. 2, a preacher’s voice floats through the room as viewers watch gloved hands gesticulating in inky black space. Here, blackness operates as both void and substance, an opening that both hides and reveals an alluring freedom.