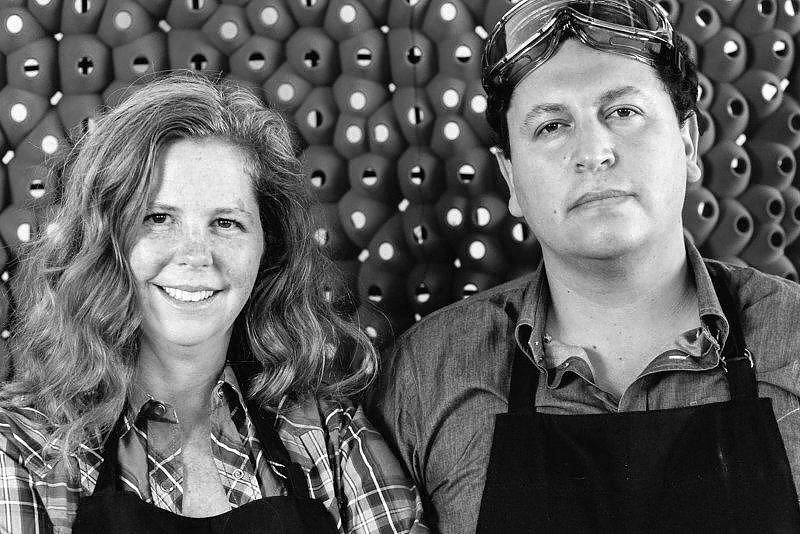 Go to Artist Website
Ronald Rael and Virginia San Fratello established their studio Rael San Fratello in 2002 following the attacks on the World Trade Center in 2001 to imagine alternative outcomes for architectural practice in a post-9/11 world. A primary focus of their work folds together indigenous and traditional craft and material practice, contemporary design technologies, and storytelling as strategies to unravel the complexities of contemporary society. Both of the artists come from extremely rural backgrounds. Rael was raised in a remote alpine valley on the border of southern Colorado and Northern New Mexico on a multigenerational ranch, and San Fratello in the forests and tobacco farms of the Deep South. Humor, play, and hybridity are important aspects of their work, often layered with serious topics that span the themes of immigration, start-up companies, waste, homelessness, fashion, graphic design, and 3D printing. Their work has been published widely, including in the New York Times, Wired, MARK, Domus, Metropolis Magazine, PRAXIS, Interior Design and the Architects Newspaper, is recognized by several institutions including Los Angeles County Museum of Art; the National Building Museum, Washington, DC; and the Bellevue Museum, Washington; and is included in the permanent collections of the Museum of Modern Art, New York; Cooper Hewitt Smithsonian Design Museum, Washington, DC; San Francisco Museum of Modern Art; and the Design Museum, London.