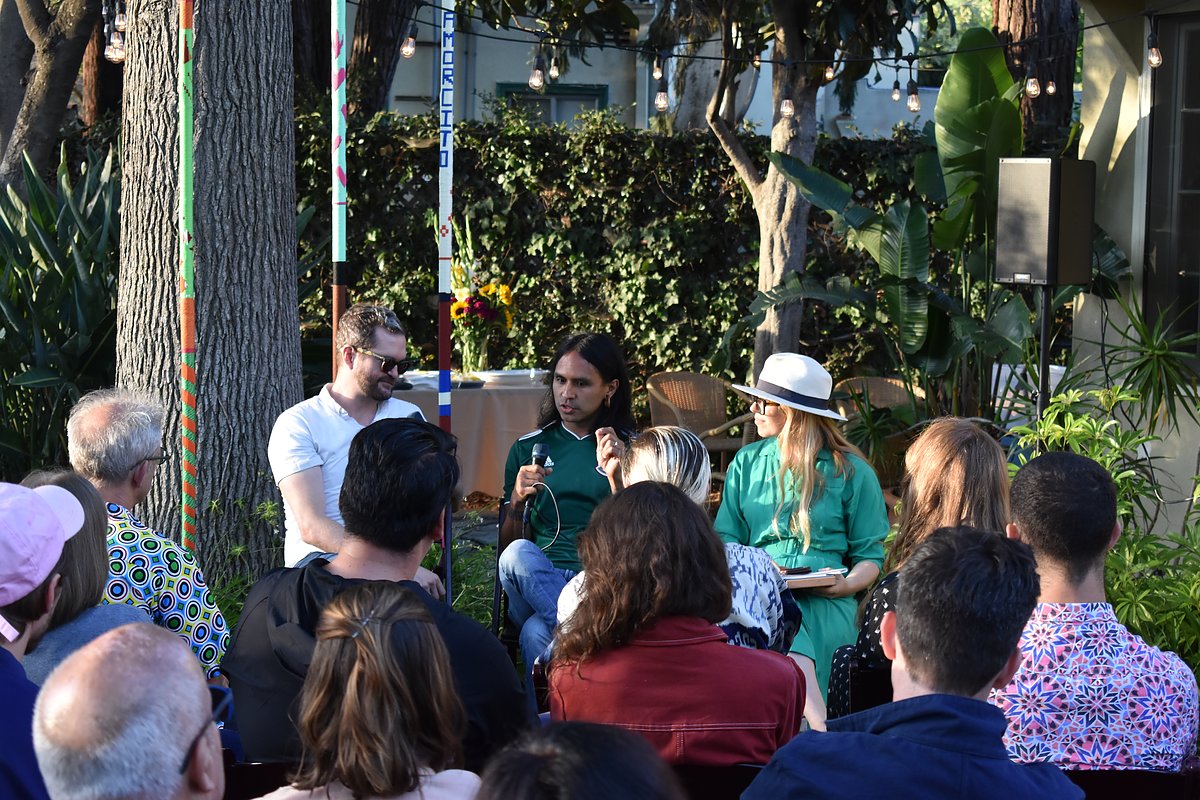 with Tucker Neel and Wyndsrfr

A large scale paper weaving by Los Angeles-based artist Lorenzo Hurtado Segovia will set the stage for a dynamic conversation guided by writer and curator Tucker Neel as the two friends wind in and out of themes ranging from the legacy of the Baroque to the agency of “Cultura Popular.” Recent transplants to Los Angeles by way of Kansas City, the musical duo Wyndsrfr will further the metaphor of weaving as they spin a repertoire that responds directly to Lorenzo’s body of work.

This program is named in honor of the eighty year old Cereus Monstrose cactus that has stood since the 1930s at the door of the eponymous Cactus House, a bungalow in Atwater Village. At each salon, a featured artist will welcome guests to view a micro-installation of works, objects, studio detritus and books essential to their practice, followed by an in-depth interview with a select conversation partner in hopes of yielding rich discovery and discussion.

Born in Cd. Júarez, Chihuahua, Mexico (1979), Lorenzo Hurtado Segovia graduated with a BA from UCLA in 2003 and an MFA from Otis College of Art and Design in 2007. The Vincent Price Art Museum organized his first museum solo exhibition, a survey of work from 2007 to 2014, Mis Papeles in 2015. Additionally his work has been featured at the Craft and Folk Art Museum, the LA Municipal Art Gallery and in the SUR Biennial. His work is in the collection of The Hammer Museum and Murals of La Jolla, the American Embassy, as well as several corporate and private collections. Hurtado Segovia is Associate Professor of Communication Arts at Otis College of Art and Design.

Tucker Neel is an artist, writer, curator, and educator. He has exhibited work in traditional fine art venues like Samuel Freeman gallery and The MAK Center for Art & Architecture, and has executed commissioned and unsanctioned projects for numerous public sites, domestically and internationally. His crowd-sourced, curatorial works seek to expand the boundaries of when, how, and where audiences access art. Neel is a contributing editor and regular writer for Artillery. His writings have also appeared in X-tra, Art Lies, The Los Angeles Review of Books, and the Bloomsbury Journal of Senses and Society. He is currently an Assistant Professor at Otis College of Art and Design.

From of the heart of the Midwest and recently landing in the center of Los Angeles,Wyndsrfr’s delicately driving indie-rock sound is garnering national attention. Featured on NBC’s The Voice, The Discovery Channel, and boasting one of Kansas City’s top ten albums of 2013, this husband and wife duo has created a sound that is achingly beautiful, hauntingly memorable and passionately performed. They have been selected as official showcasing artists at the International Folk Alliance Conference two years in a row, invited to participate in the Chevy Music Showcase for Kansas City, and named 2015’s “Best Americana Band” by the Midwest Music Awards. While sharing the stage with such artists as Edward Sharpe & The Magnetic Zeroes, Gregory Alan Isakov, Over the Rhine, and Hey Marseilles, Wyndsrfr has performed at numerous venues and festivals across the country.