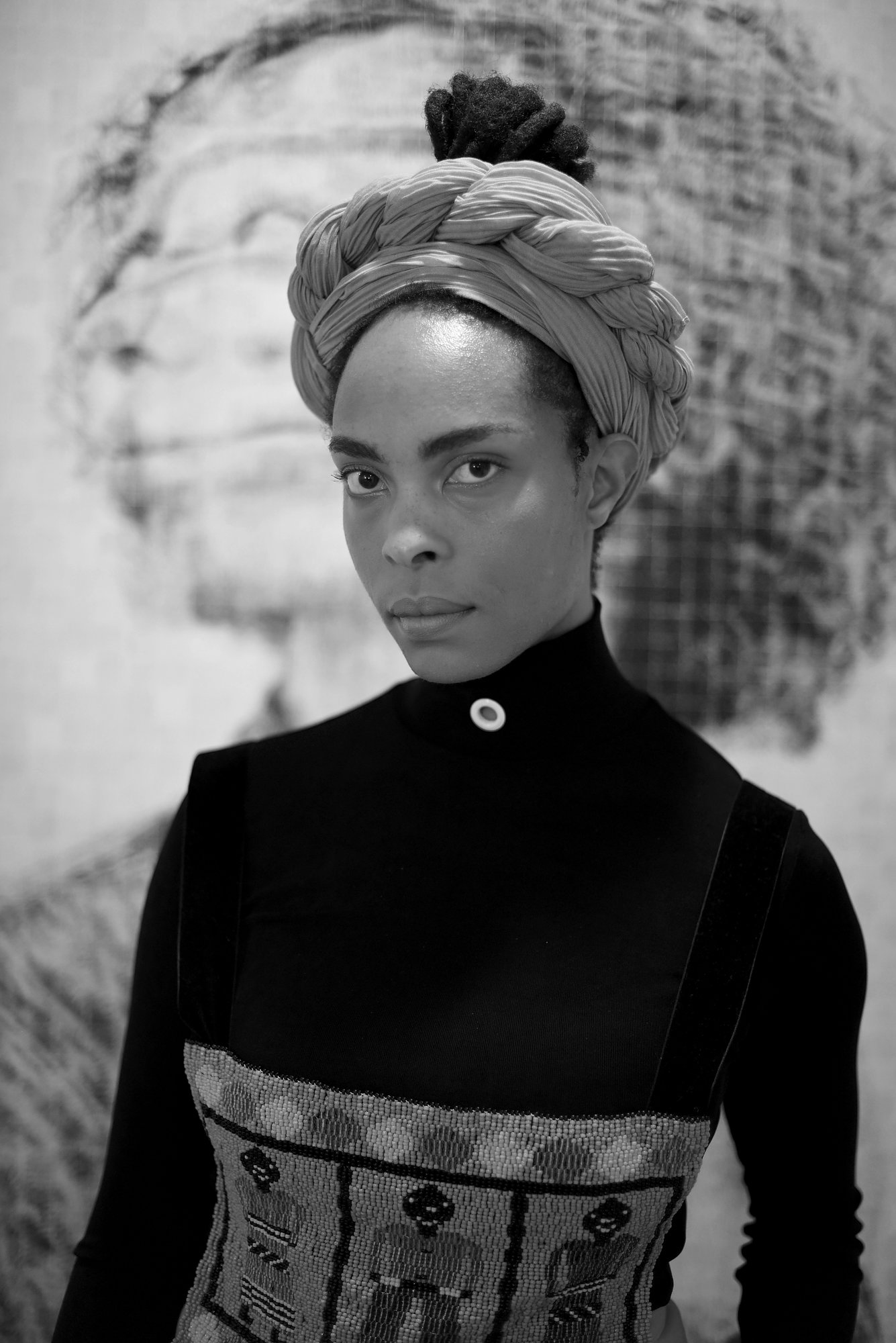 Kenturah Davis works between Los Angeles and Accra, Ghana. After traveling to Ghana for the first time in 2013, the artist was heavily influenced by Ghanaian culture and textile imagery. The design and meaningful patterns she encountered are important details that appear in her most recent work. While her media is diverse, ranging from drawing and painting to sculpture and performance, all of her works explore our relationship with language. For her forthcoming Los Angeles Metro Rail commission, Davis has rendered larger-than-life portraits of local Inglewood residents for the walls of the Downtown Inglewood Station through marks made by stamps of the letters that comprise the word “sonder” and its definition.

Davis’s self-portrait Namesake I is inspired by the oral history of the Xhosa people of South Africa, more specifically a saying meaning “He follows his name.” Naming a child is a fundamental rite of passage, and it plays an important role in placing meaning and direction in a child’s life. While also exploring the meaning behind her own name—a combination of her father’s name Kenneth and the biblical name Keturah—Davis uses Namesake I as an avenue for exploring
not only the importance of words but the humanity in using a name as identity. When describing her creative process, Davis points to ancient traditions including those in North Africa and ceremonial rites in China which convert aromatic material, such as incense, into smoke. Incense is also equated with prayer in the Bible. These performances yield existence, parallel to the way speaking can bring things into existence. To create Namesake I she transcribed a biblical text onto shavings of palo santo, burned them, and then converted the inscribed wood into plumes of smoke. The residue turned into black ink which she applied to rice paper using rubber stamp letters.

In the context of Otherwise/Revival, Namesake I offers an ethereal exploration into the power and godliness of femininity and language. In the work, the figure offers an otherworldly presence and gaze to the viewer, suggesting the power and anointing she owns by simply existing. Her Blackness is also represented by her afro, depicted by the deconstruction of Isaiah 55:11: “So is my word that goes out from my mouth: It will not return to me empty, but will accomplish what I desire and achieve the purpose for which I sent it.” Namesake I shows the important role language plays in shaping not only our identities, but our communities and understanding as well.