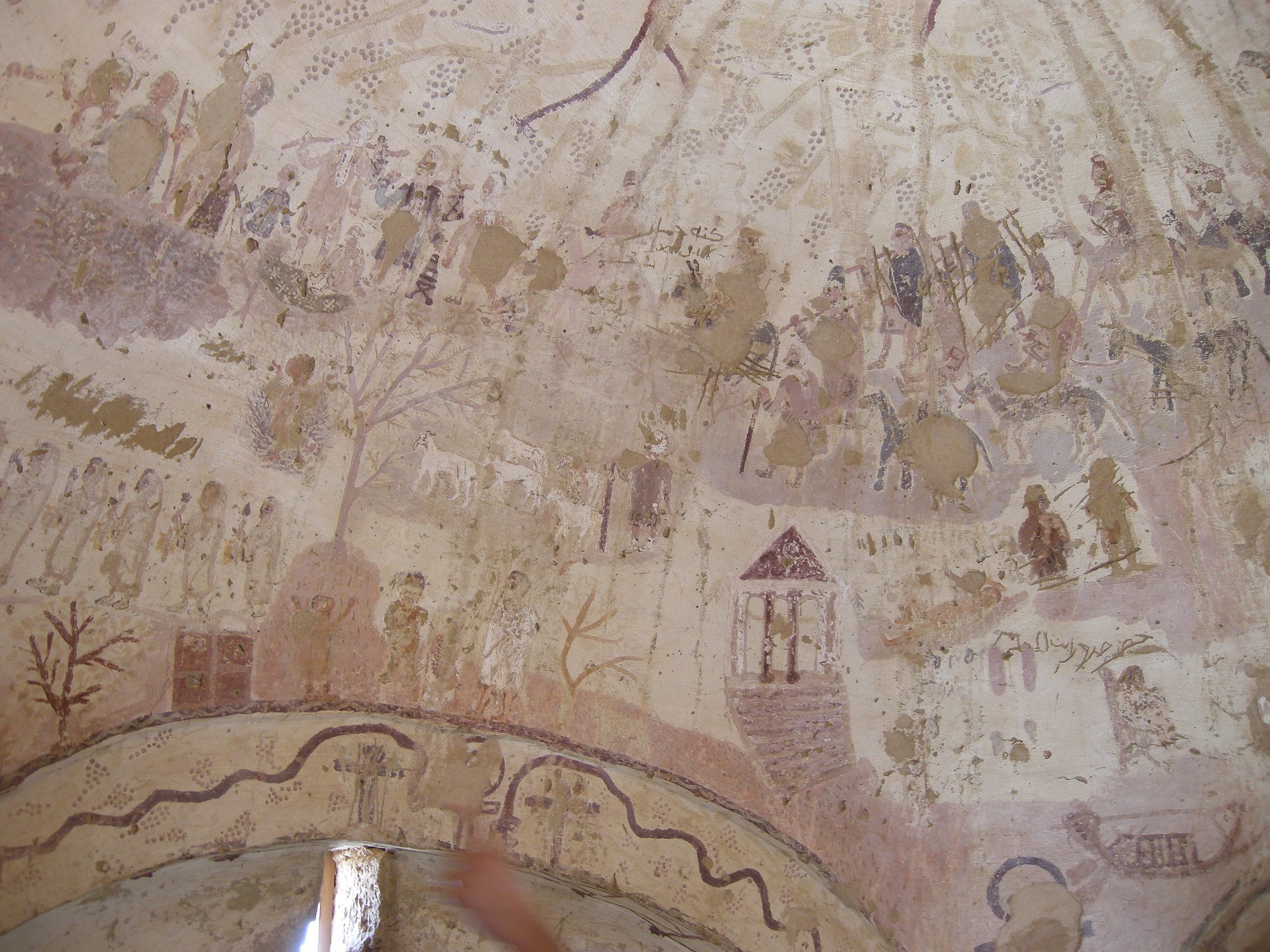 Dome Painting depicting Moses and the Israelites on their journey through Sinai
at the Chapel of Exodus, Bagawat Necropolis, Kharga Oasis, 325 - 375 AD. Photo: Roberta Green Ahmanson.

My husband and I attend a Christian church that meets in a Jewish synagogue. Each fall the courtyard is filled with various kinds of structures that are decorated with vines, branches, and colored lights—vivid reminders that Sukkot, the memorial of the Exodus from Egypt, is a living tradition. The meaning deepens for us because we are actual guests of the synagogue. In a time when war, poverty, and disease continue to prod human beings to move from one place to another, to seek refuge or to find solid ground, We are all guests here. gives each of us a window into the ways that we are all sometimes strangers, that we are indeed all guests here.

That experience has profound implications. For Jews, the memory of fleeing slavery in Egypt has been a source of ethical teaching. In his 2017 book Justice for All: How the Jewish Bible Revolutionized Ethics, biblical scholar Jeremiah Unterman wrote that “… it is startling that the legal portions of the Torah contain more than fifty references to the resident stranger….” Exodus 23:9 says: “You shall not oppress a stranger, for you know the heart of the stranger, for you were strangers in the land of Egypt.” Christianity echoes that spirit in the Book of Hebrews: “Be not forgetful to entertain strangers: for thereby some have entertained angels unawares.”

Strangers are travelers, people on a journey, often pilgrims, sometimes refugees, maybe angels. The impulse to pilgrimage permeates most of the world’s religions. At Passover, Jews look to their Holy Mountain with the toast “Next year in Jerusalem!” Christians, too, make pilgrimage to Jerusalem, their destination the Holy Sepulchre.

For Christians, beginning in late antiquity, pilgrimage to martyr shrines became a part of the fabric of religious life. Geoffrey Chaucer’s fourteenth-century pilgrims were on their way to Canterbury to venerate the bones of Thomas à Becket. Martin Luther went to Rome to the shrine of St. Peter. Since the ninth century, pilgrims have made their way to Santiago de Compostela in Spain to kneel at the memorial to St. James the Great, martyred in 44 AD.

In 2002 our family and four friends walked the 130 kilometers from Léon to Santiago. Exhausted and footsore, we earned our official compostelas or signed certificates. They hang in the entrance to our home named Casa de los Peregrinos, House of the Pilgrims.

However, the lure of pilgrimage isn’t limited to Jews and Christians. In Sri Lanka, tradition holds that the Bodhi Tree at Anuradhapura was grown from a slip taken off the tree under which Gautama Buddha is said to have reached enlightenment at Bodh Gaya. This slip that tradition says was brought to the island around 250 BC made Anuradhapura the political and religious center of the nation for 1,500 years. A UNESCO World Heritage site since 1982, the tree continues to draw pilgrims from all over the world.

Buddhists also revere Borobudur Temple on Java near Yogyakarta. Built in the eighth century of some 50,000 cubic meters of stone with a base at least 110 meters on each side (sources differ), this man-made mountain temple combines the Buddhist stupa (a commemorative mound usually containing holy relics) with the temple mountain based on Mt. Meru of Hindu mythology, and the mandala (the mystic Buddhist symbol of the universe combining the square for the earth, the circle for heaven). Each year on the Buddha’s birthday, Borobudur’s priests make a formal moonlit 3-kilometer pilgrimage to this holy mountain and then make a 3-kilometer circular climb past 1,460 reliefs of the life of the Buddha as well as another 1,200 decorative reliefs, arriving at the top studded with 72 stupas.

A few years ago, we joined hundreds of others to get up at 4:30 a.m. to make that climb to watch the sunrise. Hardly awake, we became moving parts of that mountain mandala as we watched the sun slowly transform the temple from a silent gray sentinel into a shimmering hazy peach and glistening rose vision. Ethereal.

For Hindus, going on pilgrimage is one of the five duties along with living virtu-ously and observing holy days. One major pilgrim destination is Varanasi in Uttar Pradesh on the Ganges in India. Some pilgrims follow an 80-kilometer route around this ancient city—believed to be the home of Shiva, the god of death and rebirth—stopping to bathe and pray at prescribed spots, all in an effort to foster the human spirit’s crossing from the cycles of life to liberation.

One of the five pillars of Islam is the hajj, the pilgrimage to Mecca and the Ka’ba, the square building in the center of the Masjid al-Haram, Islam’s most important mosque. Around 2.5 million people make the journey every year. An Indonesian Muslim friend worked his way through university in Ankara, Turkey, as a tour guide for pilgrims on the hajj. The site was sacred pre-Islam, but it became a holy destina-tion for Muslims when Muhammad made his first pilgrimage in 632 AD.

And there are purely secular pilgrim sites. Any contemporary art lover knows that you aren’t serious about art until you have made the pilgrimage to Marfa, Texas, where the late Donald Judd transformed an abandoned military base and part of a town into living art installations.

Each of these pilgrim stories has given rise to literature, art, and song. For Jews, the ancient Songs or Psalms of Ascents, numbered 120 to 134, were most likely written for the annual pilgrimage to the three festivals in Jerusalem. The Canterbury travelers inspired Chaucer’s The Canterbury Tales. Buddhists, Hindus, and Muslims all have musical traditions that grew out of their journeys to sacred sites. The forced migration of Africans to the Americas was the crucible for the work, sorrow, and spiritual songs of the enslaved Africans, a tradition that grew into the blues, gospel, jazz, hip hop, and more.

For those who choose to set out from the comforts of home, Chaucer probably had it right when he wrote that once the showers of April had pierced the drought of March and bathed every vein with the power to give birth to the flowers of spring, and the West Wind had breathed life into tender new leaves, and small birds have started making melody, then folks did and still do long to go on pilgrimages. There is some-thing in the human heart that seeks the sacred, the safe place, home. And that seeking has ever been connected to real places where those who have gone before us experi-enced something outside the ordinary, something transcendent, something whole.

Sukkot, with its recognition of the need for shelters along the way, is one ancient and living manifestation of this journeying. In this show, We are all guests here., Bridge Projects welcomes artists whose work gives visual form to this never-ending global reality. We are all indeed strangers, we are all guests here. So, to you all, ¡buen camino! (safe travels) on the long journey home.