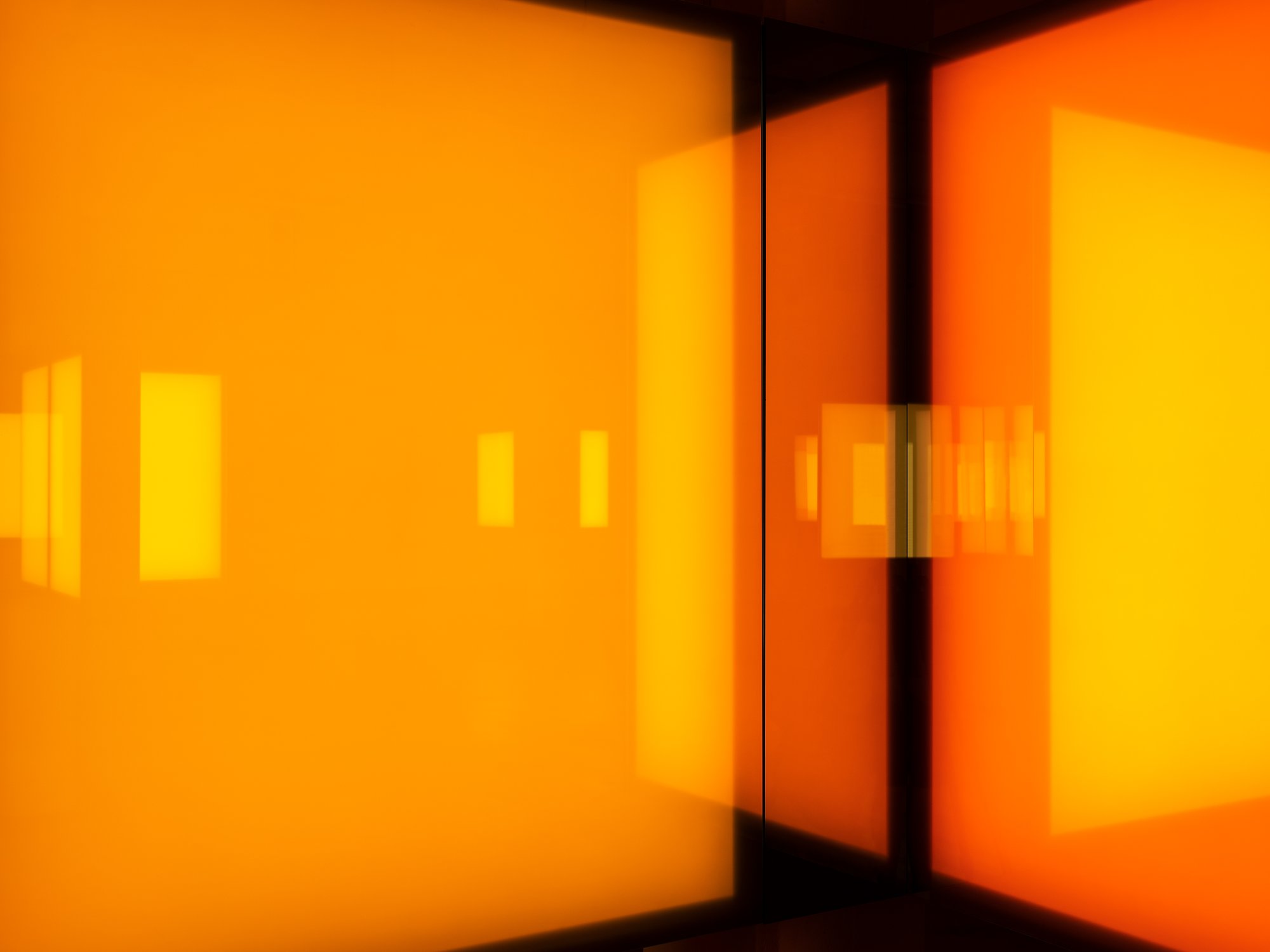 This artist re-created sunrise, indoors. Walk through the mind-blowing room yourself

Just how long have sunrises and sunsets been appearing in art? The transition from night to day and back again has overwhelmed generations of painters with nature’s splendor — but also led to those calendar photos and screen-savers. Most artists turn to more earthbound subjects so their work is taken seriously and not treated as cliché.

Phillip K. Smith III cannot be counted among them. Never one to go along with any crowd, the 46-year-old architect-turned-artist lives in Palm Desert and makes indoor and outdoor installations that neither shy away from the beauty of nature nor worry about being too beautiful to be taken seriously. His newest work, simply titled “10 Columns,” inaugurates Bridge Projects by transforming the 7,000-square-foot exhibition space in Hollywood into a synthetic sunrise/sunset.

On each of 10 13-foot-tall columns, Smith has wrapped a cluster of two, three or four mirrored panels. Each panel is considerably thicker than a TV screen. More streamlined than the monolith in “2001: A Space Odyssey,” its front and back sides illuminate, creating right-angled arrangements of rectangular planes whose colors shift and intensify, fade and blend, complement and contrast.

Think flowers designed by Donald Judd. Or fractals made by Fred Flintstone. Mirrored surveillance windows also come to mind. As do Brobdingnagian tablets, meant to be used by octopuses.

Smith has programmed the light-emitting diodes in each panel to cycle through an hourlong sequence of colors. The palette is space-age baroque, its primaries and secondaries endowed with the artificially enhanced zing of exquisitely mixed tertiaries.

Sometimes the entire installation goes monochrome. At others, shades of a single color suggest a single light source — like the sun — just beyond the horizon. At still others, Smith deploys every tint that light comes in, creating complex compositions.

For example, a red panel, perpendicular to a blue one, makes you see purple. More subtle mixtures — and more complex patterns — occur when you see one cluster’s colors reflected in another’s. Or two or three colors reflected in one or more clusters.

You’ll want to pick a spot, sit down and be bathed in the supercharged rainbow. Then you’ll want to roam around, circumnavigating each column as if you were a satellite orbiting a planet or, better yet, a planet circling the sun.

In terms of hardware and software, the installation is pretty sophisticated. But Smith is uninterested in razzle-dazzle. “10 Columns” is a decompression chamber that invites visitors to slow down, breathe deeply and see color for what it is: a sensual mystery that is never experienced the same way twice.

Smith does not duplicate the appearance of the sky when the sun crosses the horizon. Instead, he makes your attentiveness to such gradual transformations pay off in spades. If the Earth orbited not one sun but 10, sunrises and sunsets might give Smith’s mind-blowing installation a run for its money.