To Bough And To Bend 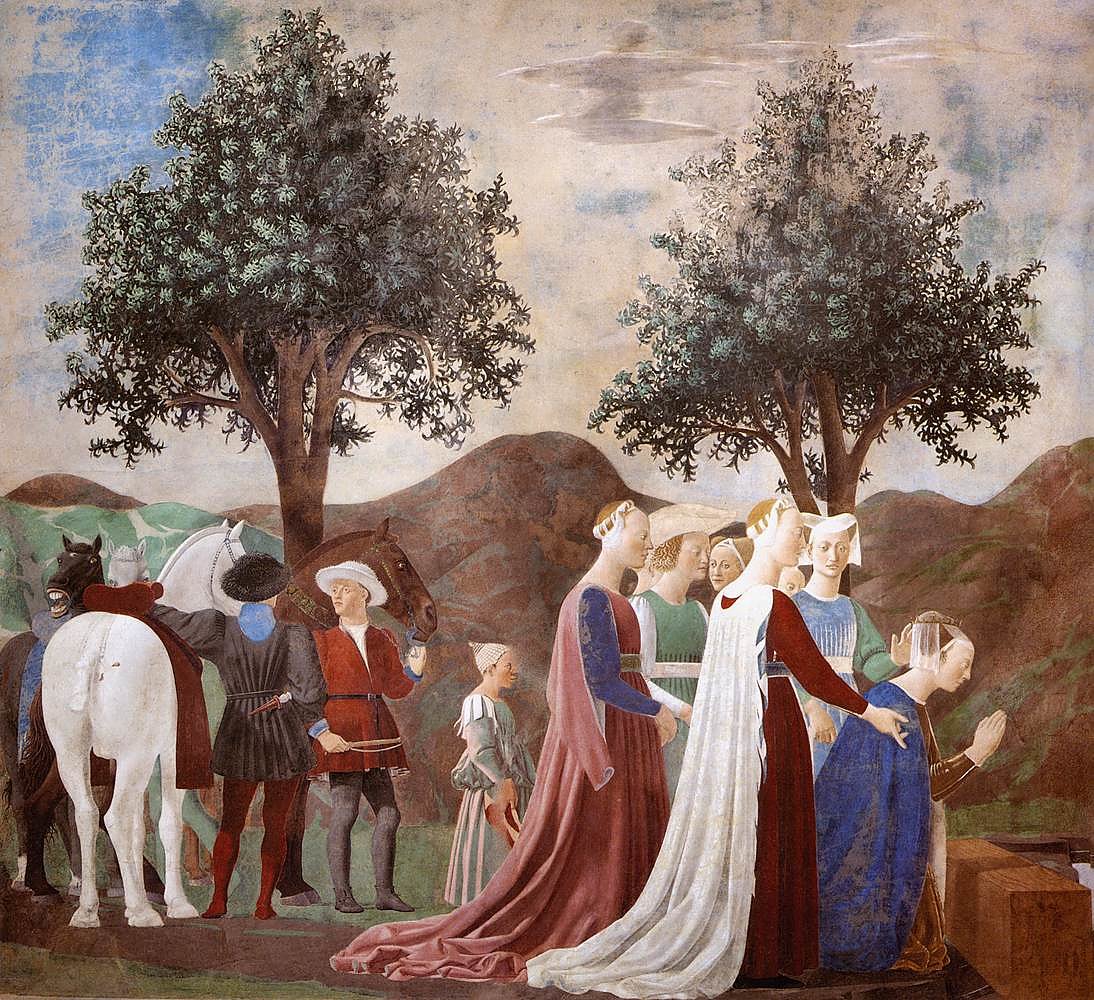 Piero della Francesca, The History of the True Cross, 1464, detail of the fresco cycle in the Basilica in San Francesco at Arezzo, Italy

When I was in high school, I saw a tree get struck by lightning. I was sitting in my favorite spot in our house: a chair in front of a huge window that looked out on an ancient oak tree. It was a hot, muggy, Iowa summer day. The sky was dark. The wind and rain flashed through the trees, pounding at the window. Enthralled, I watched the rain stagger across the street in sheets. Then, Boom! Flash! Shudder! Lightning struck that sturdy oak tree. Its stump lay shattered on the ground, with shards of wood sticking up toward the sky where its branches had once soared above me. I mourned that tree. So did my parents. A friend had died.

To Bough and To Bend, Bridge Projects’ second show, collects and displays memories and experiences of trees, similar to and different from mine. We know we need them to put oxygen in the air. We worry over forests destroyed—the Amazon, Scotland, Ethiopia. We drink coffee from paper cups. We sit on furniture made from wood. We love its look and touch and feel. And, sometimes we burn logs on fires at the beach or the campground. Trees are an integral part of our lives.

Different religions see trees in different ways. Christians and Jews share the stories of the Tree of Life and the Tree of the Knowledge of Good and Evil in the Book of Genesis. For Christians, the cross on which Jesus Christ died is a tree. For Buddhists, the Bodhi Tree provided the shade where the Buddha reached enlightenment. In Norse Myth, Yggdrasil connects the nine worlds, the universe held together by a living tree. For Basques, the symbol of their culture and freedom is Gernikako Arbola, an oak tree that grows in their capital city Guernica.

Perhaps my favorite visual tree story is Piero della Francesca’s fresco series of the Legend of the True Cross, in which the wood from the Garden of Eden becomes the cross on which Jesus Christ was crucified. Piero completed the work between 1452 and 1466 in the Bacci Chapel of the Basilica of San Francesco in Arezzo, Italy. His source was The Golden Legend written by the Dominican friar and later Bishop of Genoa Jacubus da Varagine around 1260. The book recounts the stories of the lives of saints, with several versions of the story of the True Cross woven among them.

The theme was potent in Italy at the time because after the Ottomans captured the Byzantine capital Constantinople in 1453, they began raiding the Italian coast, torching towns and often killing the inhabitants. Their leader Mehmet II aimed to capture the entire Italian peninsula. For the Italians, the saga of the True Cross was a symbol of hope. If it could survive, they could too.

In Piero’s version, Seth, the son of Adam and Eve, took a branch (or a seed) from the Tree of the Knowledge of Good and Evil, the tree from which the first pair had eaten the forbidden fruit, and planted it on the grave of Adam; from there, the tree and its descendants flourished. The great King Solomon used its wood to build a bridge that so impressed the Queen of Sheba that she was inspired to predict the coming of Christ to make a new covenant with all people, not only the Jews. Aghast, Solomon tore down the bridge and buried the wood. Centuries later, St. Helena, mother of Constantine the Great, went to Jerusalem to find the site of the crucifixion and the True Cross, believed to be made from the wood of the Tree of the Knowledge of Good and Evil. She found three crosses, among them the True Cross which revealed itself when a woman was healed by its touch. Helena’s cross was later covered in silver and placed in Constantine’s Church of the Holy Sepulchre. Egeria, a fourth century pilgrim, writes of seeing it and seeing people kiss and touch it. In the early seventh century, Emperor Heraclius recaptured it and carried it in triumph to Constantinople. That recovery was the sign of hope for fifteenth-century Italians.

Piero’s frescoes—from the death of Adam to Helena’s finding the True Cross—shimmer, the air alive. It’s as though the figures are about to move, to step perhaps off of the chapel wall. At the center of their attention is the tree that became the True Cross.

For the many artists in To Bough and To Bend, trees tell their own stories, whether it be Kieran Dodds’s photographs of threatened Ethiopian church forests, Tim Hawkinson’s St. Sebastian made from Christmas trees, palm branches, seeds, and fruit skins, or Ellen Wagener’s drawing of the massive D.H. Lawrence tree. The exhibition both reveals and invites. It reveals the responses of the artists as something integral to all our lives and to the faith of many. It invites each of us to ponder the meaning of these magnificent plants
that make our life on this planet not only possible but beautiful.