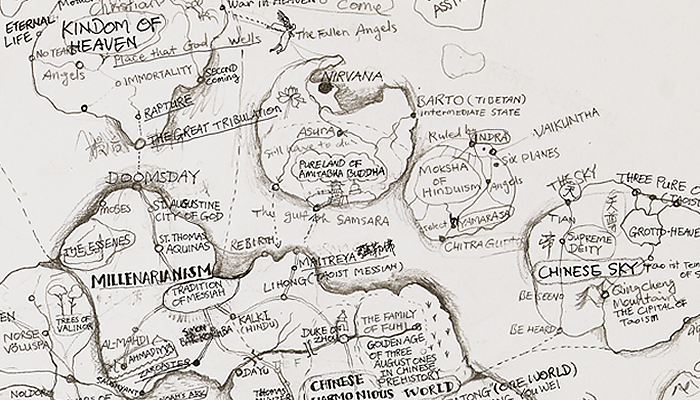 Qiu Zhijie, A Map of Utopia

For more than a hundred years, China has been committed to forced secularization, where most religions have been heavily persecuted or even banned. But religion is now back at the center of Chinese society and politics, and the country is awash with new temples, churches, and mosques—and politicians trying to harness religion for their own ends. Churches are being demolished, Muslims are forced into reeducation camps, and the government promotes Buddhism and folk religion. How do we reconcile the complicated religious worlds of postsecular China? This lecture will look for an answer.

Pulitzer-Prize winning journalist Ian Johnson has lived in China for more than 20 years writing on society, religion, and history. He was selected for the National Endowment for the Humanities Public Scholars program for his book in progress on China’s unofficial history. His newest book The Souls of China: The Return of Religion After Mao describes China’s religious revival and its implications for politics and society. His other works include Wild Grass, a book on civil society and grassroots protest in China, and A Mosque in Munich, a study of Islam and the Cold War in Europe. He has also contributed chapters to My First Trip to China (2011), Chinese Characters (2012), and the Oxford Illustrated History of Modern China (2016).

After the lecture, there will be a conversation between Ian Johnson and Promise Hsu. Promise Hsu is an Associate Editor of VoegelinView and a Beijing-based independent journalist and scholar. In 2017, he became the founding editor-in-chief of The Kosmos (kosmoschina.org), an independent Chinese quarterly of history and ideas. He was a world affairs journalist at China Central Television’s English News Channel, a member of American Political Science Association, and a visiting scholar at Calvin Theological Seminary. He is author of China’s Quest for Liberty: A Personal History of Freedom (St. Augustine’s Press, 2019).