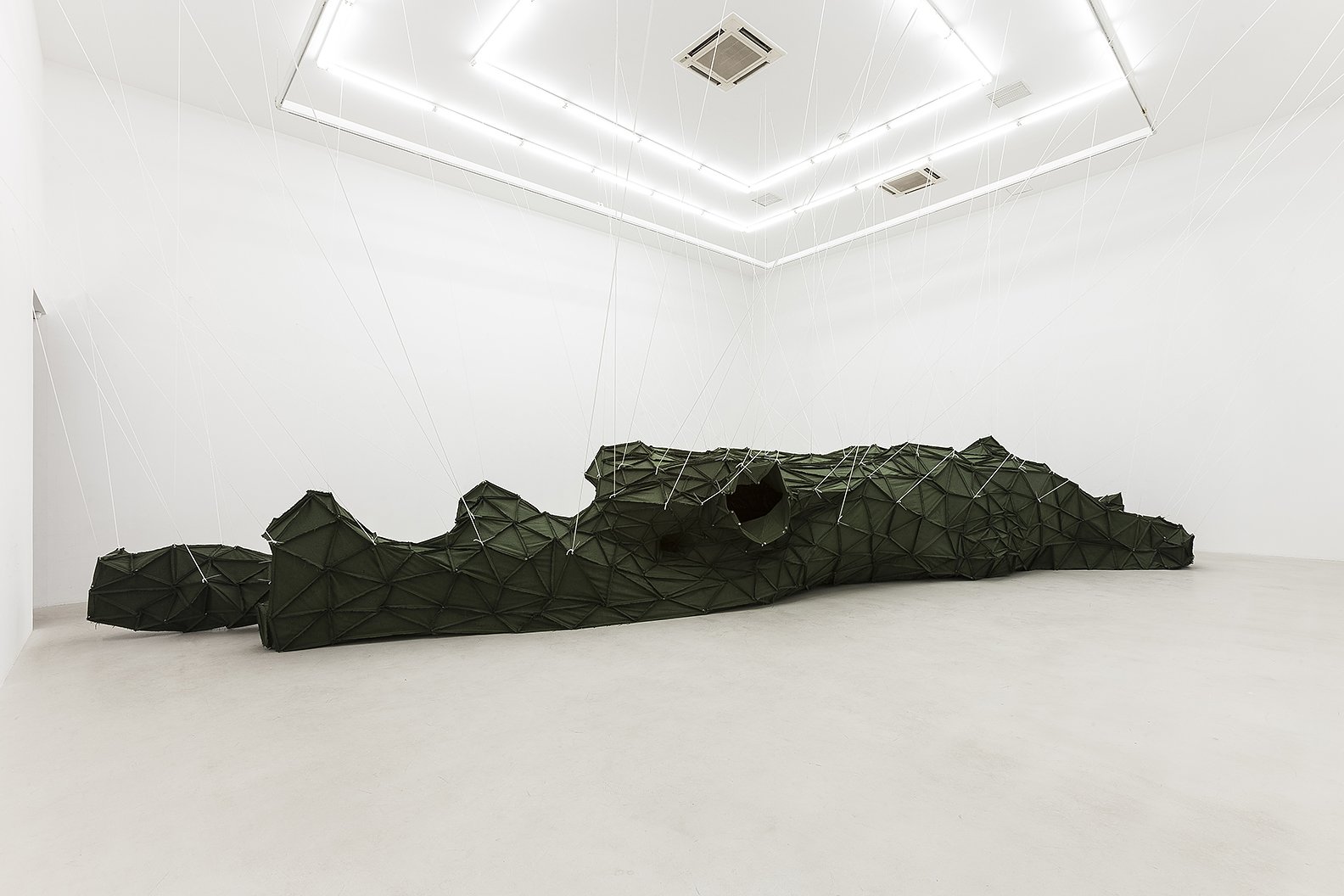 Curated by James Elaine, founder of Telescope, a non-profit art space in Beijing and former curator of Hammer Projects in Los Angeles and the Drawing Center in New York, the exhibition draws its title from Yang Jian’s monumental sculpture, “A Composite Leviathan.” The term “leviathan” appears in the Biblical books of Job, Psalms, Isaiah, and Amos. It’s etymological connotation of “joining” suggests the tightly knit scales of a sea dragon. Biblical literature associates this leviathan with chaotic forces which are evidently at odds with the divine, creative order. On account of its apparent etymology, Thomas Hobbes used the term “Leviathan” for the title of his famous political treatise which suggested that national government was a necessary aggregate of social power. Many of the artworks in the exhibition reflect the dynamics of the composite social structures of contemporary society.

An iteration of the exhibition was first presented at Luhring Augustine Bushwick from October 11, 2019 to February 1, 2020 and featured twelve emerging Chinese artists. In its Los Angeles iteration, the show expands with fresh examples of contemporary art in China. In A Composite Leviathan, each work emerges from the complex fissures of the artists’ own lived realities, both spiritual and political.

While the diverse practices of these artists do not fit neatly into any single category, all of their artworks investigate or reflect the rapidly transforming landscape of contemporary culture, including the impact of emergent technologies, globalization, and urban sprawl.

The second chapter of the exhibition opens January 23, 2021 and is anchored by large-scale artworks by Zhang Xinjun, Ye Su, and Liu Dongxu, among others. Zhang Xinjun’s Green Hole is a sprawling, wormlike installation that is composed of canvas and ropes that are commonly used at construction sites and temporary markets. The form of the massive yet ephemeral sculpture comes from the negative space of a worm-eaten hole in a tree trunk. With Ye Su’s The Coming Sharp No. 3, an installation of patterned, translucent silk panels creates an imaginary skyscraper cityscape within the gallery. The silk panels are printed with enigmatic fruit patterns and each have a peep hole at eye-level. Liu Dongxu’s Glistening Waves sculpture conveys a sense of ethereal space through the quality of light it reflects. The flat sculpture is made of delicate porcelain pieces coated with a metallic gold glaze resembling polished gold; the interlocking shapes lie at an angle on the floor. These artists use everyday, commonplace objects to create transcendent spaces of shared experience with their sensitive installations.

Ring the bells that still can ring
Forget your perfect offering
There is a crack, a crack in everything
That’s how the light gets in.

In the Bible, Leviathan is a dark creature of immense size which rises out of the sea and cannot be subdued by mere humans alone. “Leviathan” can also refer to anything of enormous proportions and formidable power, such as international corporations or totalitarian states and their vast bureaucracies. In artist Yang Jian’s sculpture A Composite Leviathan, which inspired the exhibition’s title, we see a relic of an intimidating yet tottering state system. The monumental piece is composed of distinct elements sourced from disparate public sculptures and spaces. It is a jigsaw puzzle of incongruous components that don’t fit together quite right but beautifully reveal the twisted metal structure within. These cracks in the armor represent the lines that have drawn this exhibition together. The focus of the show is not political, thematic, religious, or stylistic; rather, it showcases a community of dispersed artists, living in a conflicting system of flux and control, who are drawing the lines that let the light in.